How Can Educators Change the Face of Computer Science? 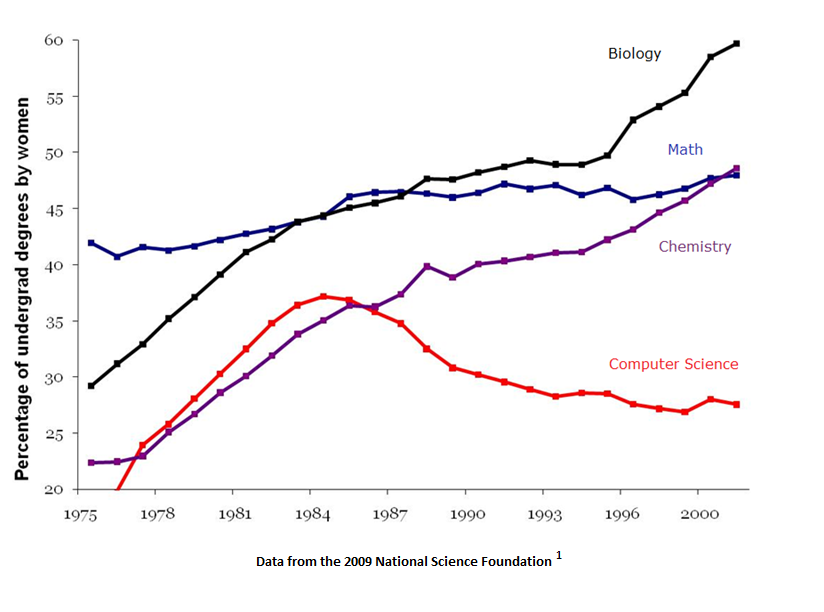 Despite lucrative job opportunities, computer science (CS) continues to graduate far fewer women than men. CS consistently has one of the largest gender disparities among science, technology, engineering, and math (STEM) fields with women making up only 18% of those taking the AP CS exam, compared to 50% of those taking the AP Calculus exam2. Why are women not pursuing CS to the same extent as their male classmates? At the University of Washington’s Stereotypes, Identity, and Belonging Lab (SIBL), we have been researching how inaccurate stereotypes of computer scientists signal to women that they do not belong in CS. However, educators can play a critical role in shaping and changing these stereotypes.

In one of our recent studies, we asked college students to describe CS majors. They stereotyped CS majors as intelligent, intensely focused on computers, technology-oriented, and socially unskilled3. These stereotypes are often disseminated through the media. We further showed that women express more interest in CS when this image is altered. For instance, women who read an article (that we wrote) stating that the image of CS is changing to be more diverse expressed greater interest in CS than women who read that CS stereotypes are staying the same3. Showing non-stereotypical media representations of computer scientists to students can help reduce gender disparities by counteracting the narrow perception of CS majors. Besides changes in the media, stereotypes can also change through CS environments and role models.

How often do we think about what our classroom looks like and what message that might send to students? Allison Master, a postdoctoral researcher at SIBL, studied high school students’ interest in CS after they were given descriptions and photographs of both a stereotypical and a non-stereotypical classroom. The stereotypical classroom contained objects that were generated by asking a separate group of students what they thought they would find in a dorm room and office of a computer scientist.  These objects included Star Wars items, tech magazines, and science fiction books. The non-stereotypical classroom had objects such as nature pictures, general magazines, and plants.On average, women expressed significantly more interest in taking the CS class after seeing the non-stereotypical classroom, regardless of the instructor’s gender. Men’s interest, in comparison, did not differ by classroom, showing that this simple change can attract women without deterring men4. This pattern persists through college and occurs even when the classrooms are virtual4, 6.

What about classrooms that do not contain either of these sets of objects? We found that women’s interest in CS before seeing any objects matched interest levels after viewing the stereotypical classroom. This means women’s pre-existing expectations about computer science are likely closer to the stereotypical room5.Taking the time to design classrooms in a non-stereotypical manner can help attract women to CS by giving them a new image of the field.

Aside from the physical environment, role models such as guest speakers can also influence students’ interest. Our research shows that women respond better to and are more encouraged by role models who do not fit current CS stereotypes, and this is true regardless of whether role models are male or female.

Taken together, our research suggests that examining images of CS may be fundamental to understanding why women are less interested in CS than men. We think that it is time to cast a new and more accurate image of CS to encourage women’s participation. The overall message delivered by our research is that seemingly minor changes in educational environments may go a long way towards changing the face of CS and reducing gender disparities in the field.